We also love talking about cheese. Here you'll find some of our latest musings and a bit of an insight into the mind of The Cheese Geek

What the Cheese Geek is eating this Christmas

This year, as usual, I have eaten a lot of cheese. It goes without saying really. Throughout all of the tasting, testing and experimenting, in the back of my mind I’m always thinking…could this cut it on Christmas Day? When you are in the line of work I am in, there is a certain level of expectation when I wheel the cheese out at around 6pm on December 25th.

This year I have decided in general to go for slightly less rich cheeses, as I want to try and not eat myself into a food-induced coma. After much toing and froing, these are the cheeses I will be eating on Christmas Day:

Where else to start, but a cheddar. Everyone has their favourite cheddar, or at least favourite style of cheddar. Or, if you are more geeky about it like me, you have your favourite cheddar depending on your mood or the occasion. For a wet, damp, grey rainy day, nothing beats Montgomerys, or if I need to drown my sorrows with a glass of whisky and some cheddar, it would have to be Isle of Mull.

For me though, I made my mind up early this year I was going to go with Hafod. Not too punch-me-in-the-face, it is intensely buttery, slightly nutty thanks to the alpine starter cultures, but has all those classic cheddar nuances, like the grassiness and that earthy farmy tang. Visually, it also has the most beautiful rusty hew on the rind, meaning it not only tastes good, Hafod will look beautiful on my Christmas cheese table.

There is just something so unavoidable about Comte and Christmas. Whilst Comte has very much become a cheese for all occasions now, and all the seasons, I just love Comte at Christmas in particular. The sweet spot for me, that 18-22mths maturity, means we are looking at milk gathered from the cows between June and October of the previous year…it just doesn’t get better than that. The cows will have been frolicking gleefully in their summer meadows, so yeah sure you get that deep roasted nuttiness, but you also get hints of that fresh meadow sweetness from the grass and flowers up at altitude where the air and water are fresher than fresh. The best Comte, at the best time of year. I can’t leave it out

It would be irresponsible of me to leave out Kern this Christmas. Last year’s Supreme Champion at the World Cheese Awards, it deserves every one of its accolades. Deep nutty, buttery hazelnuts bordering on caramel, followed by an incredible honey floral sweetness. It has levels of complexity that are just not usually within the realm of what is humanly possible. What is also so beautiful about it is that for all its density, it is such a light cheese, again perfect after a rich Christmas meal. And, like the Hafod, the black wax coating of the cheese gives a lovely mix of colour to the cheese selection. 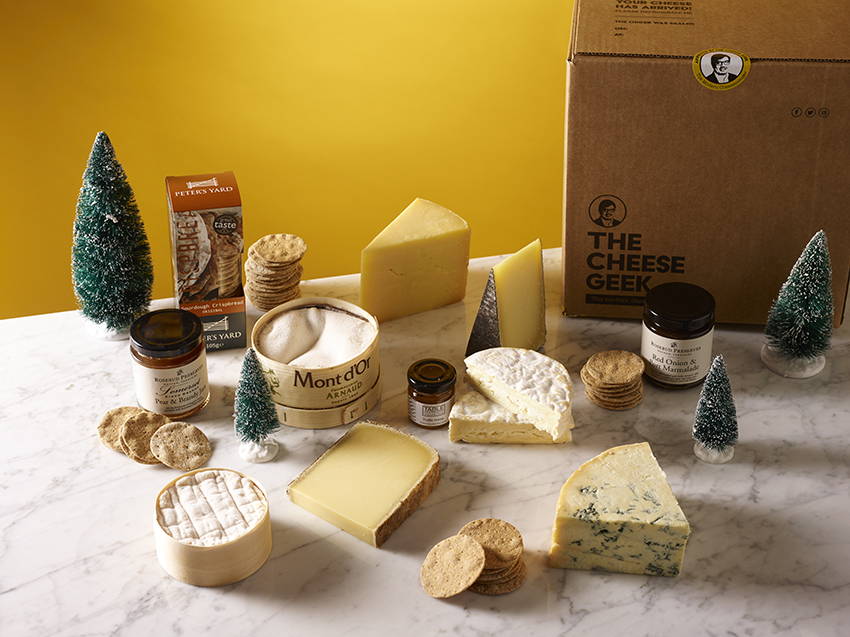 Eat like the cheese cheek this christmas with the goldie

The ultimate seasonal cheese, made with the milk of Montbeliarde cows in for the winter from the alpine pastures (where their milk has busily been making cheeses such as Beaufort) the yield is lower, but the milk richer…and so is the cheese. Wrapped in a piece of spruce, this just tops off the creamy, gushy cheese with some floral sweet vibes, like a DJ taking a Ronan Keating song and dropping a bass on it. This is one of those cheeses that needs little introduction…it just is.

Until someone introduces me to a combo that is as lip-smackingly, lie-down-and-have-a-rest-I-think-I-might-pass-out good as Tunworth and truffle honey, on a Peter’s Yard Original crispbread, then Tunny is going to remain on my Christmas list. It has absolutely everything you need from a Camembert style cheese. Slightly bitter cabbage saltiness, tick, slightly mushroom vibes, tick, creamy and rich, tick. Then in comes the white truffle honey. The sweetness dances with the saltiness, the truffle snuggles up with the mushroom earthiness, and the whole thing does the splits on the PY crispbread. Sit down before you eat it, as you might pass out.

This Christmas, I thought long and hard about Langres, Epoisses and other classic washed rind, pongy cheeses that smell of your feet after a day out in the sun wearing those old trainers without any socks on. If you touch the rind of these cheeses, then touch your nose, you will become nose blind. The thing about brutish cheeses like this is that they are not necessarily for everyone. I dream of a cheese experience when even your brother’s new girlfriend (who has never spent Christmas with your family before, and has been dreading the cheese more than the charades as all she really wants to eat is Catherdral City cheddar or at a push Boursin, and has been able to smell the cheese ever since she arrived two days ago) will not only be willing to try the ‘crazy-people’ cheese, but also love it. And that is where Golden Cenarth comes in.

It is an Epoisses style cheese, it has that look to it, to a large extent the smell of it. But it doesn’t look like it could kill you within one second, and most importantly, it tastes like your wore socks on that frolick in the sun. Less sweat, less farminess, less all round aggression. But that doesn’t mean it lacks flavor or complexity. It is rich, creamy and spoonable, but what I love is it is slightly fruity fermented fruit sweet, kinda like a Taleggio, rather than really leathery and sweaty. I am really excited about having the Cenarth this Christmas, it is such a cracker of a cheese, although if you do have smelly feet, you won’t be able to blame it on the cheese this year.

Finally, my choice for blue. The cheese that divides a nation. Blue haters, and blue raters. Of course the traditionalists may have just picked up pen and paper to write me a strongly worded letter on how a ‘so-called’ cheese professional could possibly not have Stilton in their Christmas cheese plans. Well, I too have Stilton every Christmas…and it is great. Well, I say that, it is nostalgic. But the reality is, there are so many blue cheeses made in this country now that quite frankly are just as good as Stilton, and share very similar taste profiles to it, so it would be amiss of me to ignore them every year simply because Stilton ‘got here first’. And so in comes Bath Blue….who by the way is no billy nobody.

Supreme Champion at the World Cheese Awards 2014, this is blue cheese with skills. It has the Stilton look, and the Stilton texture and crumble. In fact, on appearances, it is very similar to Stilton (although I would argue the veining is consistently prettier and more uniformly spread, but these are geeky semantics that normal people don’t care about). But, to taste, where I think most Stilton has 2-3 gears, Bath Blue has 4-5…and not only that, it doesn’t then just finish and head off into the sunset. It grabs you by the cojones and takes you off into the sunset with it. It is a long, toasted, roasted hazelnuts and chestnuts finish that just lingers, and lingers, and lingers, and then just when you are about to ask everybody to go home because the party is over and you want to go to bed, it leaves, quietly. The perfect guest. I just cannot sing the praises of this cheese enough, and it is a worthy usurper to the Stilton crown this year…and who knows if it goes well, it might be here to stay. Bring on the strongly worded letters!