What is vegetarian cheese?

The central character to this conversation is rennet. Rennet is one of the four key ingredients in making cheese. A quick recap on cheesemaking 101:

The central character to this conversation is rennet. Rennet is one of the four key ingredients in making cheese. A quick recap on cheesemaking 101:

Milk is gathered, starter culture is added to reduce the pH of the milk so the acidity is at the right level, at which point rennet is added to coagulate the milk, separating the curds from the whey, and the finally salt is added.

So that is all that is needed to make cheese! Milk, starter culture, rennet and salt. There is an argument that some slow set cheeses can be made without any rennet (or acidifier), but from our perspective, that is called yoghurt, not cheese!

So, what is rennet? Well, most commonly, particularly in traditional hard cheeses, and the majority of continental cheeses (French cheese almost entirely), rennet is a meat product. It is in fact the fourth stomach of a ruminating calf (most commonly). This contains the enzyme necessarily to coagulate the milk (we will leave it at that for now, the science of this can perhaps come in a future article!).

So, ‘traditional’ rennet is a meat product. Making the resulting cheese non-vegetarian.

This is probably a good moment to raise the story of how cheese was ‘invented’ or rather stumbled upon somewhere around 6500-8000BC. The story goes, a shepherd or herdsman (he could have been anything really) was on a long journey, and had stored some milk in the only receptacle he had, namely the stomach of a calf. After all the walking and jiggling about, the milk began to curdle, and what he was left with was curds, and whey. He tried it (they ate anything back then) and eureka, it was delicious (highly unlikely actually, but probably led to curious experimentation).

It is possible, that far more likely, cheese was stumbled upon with the invention of pyrotechnics, and the resulting invention of clay. This would have enabled the storage of milk (previously not possible) in the ground, and the eventual curdling of said stored milk. Anyway, I digress…

The term ‘traditional’ rennet is slightly misleading, as there is evidence of cheesemaking with ‘vegetarian’ rennet as early as the 1st Century. A bit of a Rockstar figure in the history of cheese, Columella wrote famously in AD60 that alternatives to ‘traditional’ rennet were wild thistle, the seed of the safflower, and fig sap. So there is nothing ‘new’ or ‘revolutionary’ about making vegetarian cheese.

Take a look at our subscriptions...

So what's the difference?

Vegetarian rennet, also known as microbial rennet (there is also such a thing as Recombinant/FDC rennet, but things start getting slightly complicated there, so we can leave for now at risk of this blog becoming a novel) has various properties that lend it to being preferable to animal rennet in certain styles of cheese. And vice versa. So, for example, in hard cheeses that have matured over a long period of time, vegetarian rennet tends to create bitter flavours that are slightly unpleasant. However, in younger, fresher cheeses, it can create sharp, acidic (in a good way) fresh notes that are preferable.

Examples of vegetarian rennet used for cheeses in modern cheesemaking (or relatively modern in what is an archaic industry) are Cardoon Thistle (particularly in Portugal where it is quite a trademark) or microbial rennet, derived from funghi, mould or yeast. The latter is considerably cheaper than animal rennet (or thistle) and therefore tends to be more widespread. 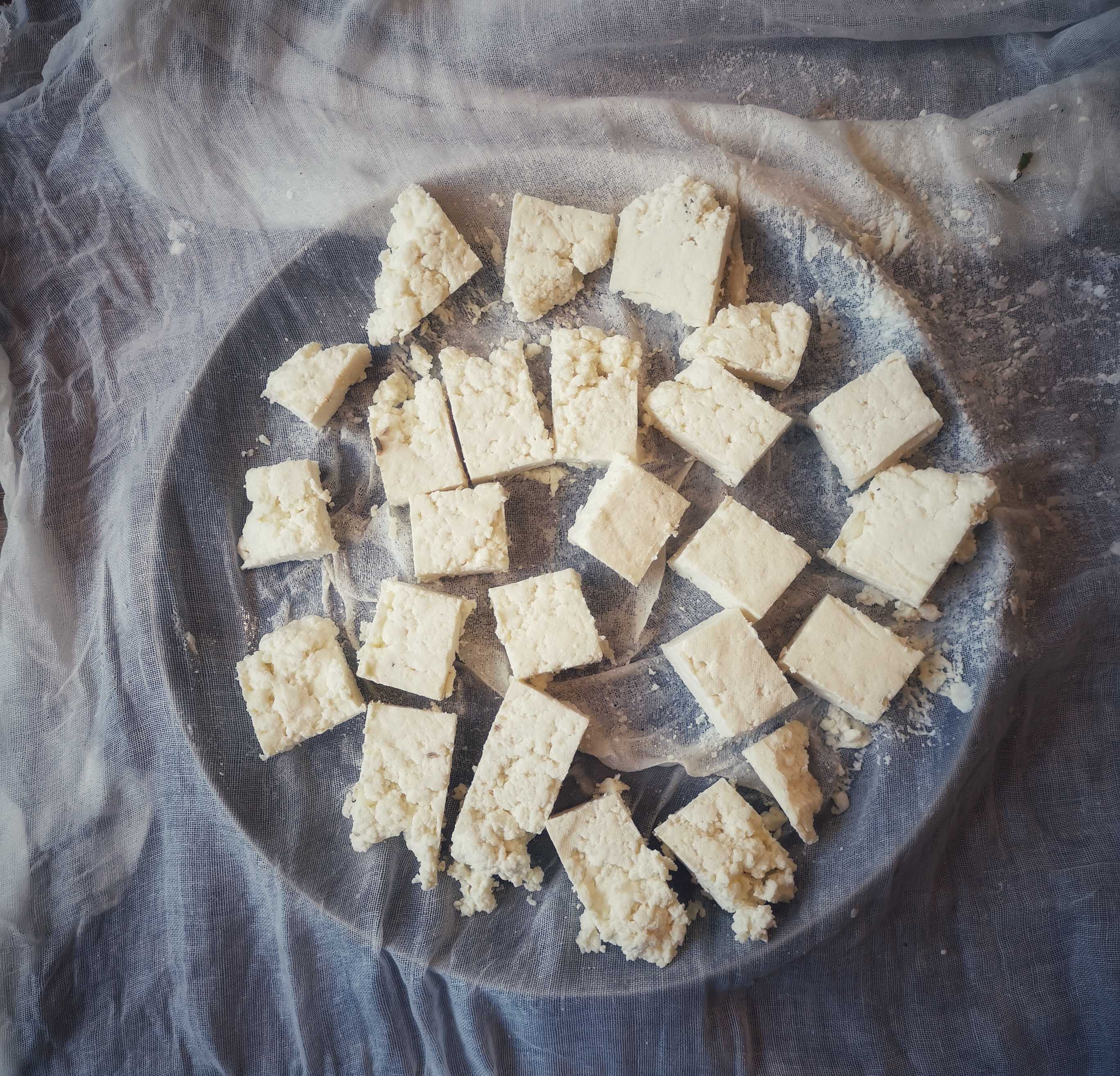 For example here's a fresh cheese one of our Geeks made with fresh lemon juice as the acidifier!

And a cheesy conclusion

Finally, on the Recombinant/FDC rennet, because now I have mentioned it I can’t leave it alone, this stands for Fermentation Derived Chymosin. In actual fact, 80% of cheeses use FDC rennet, and the reason it is complicated is because the original enzyme (chymosin) is isolated and replicated from an animal product. So originally, an animal was involved, but subsequently, no animals are required to make this rennet. So does that make it vegetarian or not? Officially, the answer is not. But now you have the information to make your own mind up!

Ultimately, there are plenty of fantastic vegetarian cheeses, that have not been adapted to suit vegetarian lifestyles or trends, but because they have always been made that way, and it makes the best cheese. So it is really easy to enjoy cheese, and stick to strict vegetarian lifestyle, without compromising on quality, taste of flavour…or tradition.